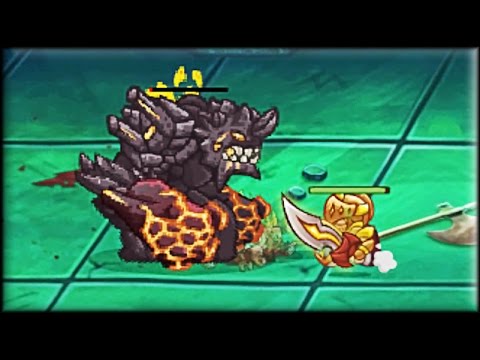 This lone knight has been assigned by the king to defeat hordes of monsters. It will need some assistance in this action-packed game called Mighty Knight. Select an area on the map and win the mission by defeat all the enemies. You will unlock new allies as you progress in the game. These characters have their own skills and weaknesses so you must enhance their stats. You can upgrade them by using the gold you’ve earned from your battles. Once a certain stat is raised high enough, you will be able to unlock new skills for your knight and for your team.

The land of Medania is under siege by different hordes of evil. The king sends you to protect the kingdom and defeat the forces of evil. Knight Davion is tasked into doing such a feat and he isn’t scared one bit. He must now trek from different sides of the kingdom to stop these monsters. He meets other characters along the way like Marcus the Barbarian, Desmond the Rogue and Ralph the Archer. Together, the four of you will liberate Medania from the scourge of the land.

The visuals of the game are really good as they are hand drawn with cartoon animations. You may even chuckle at the intro where the writings on the opening come off something as if it was made for the kids. It simply goes Davion must fight bad guys because king is mad. When Davion defeats bad guys, king will be happy or something to that extent. The music as well is really good as it gets you in a fighting mood as if you’re getting ready to save the kingdom as well.

Mighty Knight comes off as a fighting game but mixed with being a beat em up. You control Davion with the use of the buttons for moving him around. You can also control Davion in letting him attack and dodge incoming attacks. You have a life bar so if you or Davion will die then the level fails. You can always restart if you want to. When you complete a level you can proceed with the story. You can meet new members that will join your team. However you can only use them in specific levels. Each character has their specialty. There are characters that have good strength and defense while others excel in speed. You can also choose to upgrade your characters in terms of the equipment that they are using. There are equipment that increases defense, damage, speed and others. You can choose to mix and match or choose to go on a pure route for more refined fighting. You also get achievements in specific parts of the game. Getting those achievements will reward you with gold allowing you to upgrade some more. You can also choose to look at your Compendium. The Compendium is like a bestiary where you get to see the information of enemies that you have already met before. Speaking of enemies, there will be a boss in some of the levels so be sure to fight them off. When the level also begins you can choose to get a buff done to you which costs every time you use it. Finally after you complete a level, there will be two sub-modes that you can unlock. These sub-modes offer a kind of challenge but rewards you with gold should you be successful enough to finish them. The challenges range from solo fighting, time trials or not getting hit once. They are not required since you already finished the levels but a good addition.