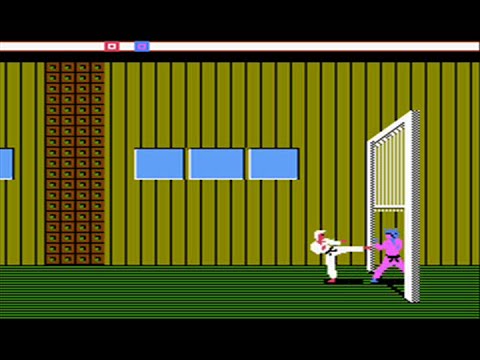 Make sure you follow me on dailymotion for exclusive videos.

Karateka is a 1984 beat’em up video game by Jordan Mechner, and was his first game created while attending Yale University. It was originally programmed for the Apple II, and was later ported to several other home computers and early gaming consoles. The game was published in North America by Brøderbund, and in Europe by Ariolasoft.The player controls an unnamed protagonist who is attempting to rescue his love interest, the Princess Mariko, from Akuma’s castle forteress. The game exhibits a combination of a side-scrolling platform and fighting game elements. The player uses punches and kicks.

The game, as with most at the time of development, lacked checkpoints or the ability to save the game, making it a challenge to complete in a single sitting.Karateka has been well-received, particularly for its realistic animations used for the game’s characters. The game was considered a breakthrough success for Mechner, and would eventually result in his development of the Prince of Persia franchise. A high-definition remake, spearheaded by Mechner, was released as a downloadable title for the Xbox 360, Microsoft Windows, PlayStation 3, with planned ports for the iOS and Wii U systems for download.

The player is introduced to the unnamed hero as he ascends a mountain into Akuma’s fortress to rescue Princess Mariko.As the player directs the hero into the fortress, various foes appear and attempt to stop him. Once in a fighting stance, the player delivers blows, punches, and kicks at the enemy while dodging the enemy’s attacks. The player’s health, shown by a bar on the bottom of the screen, diminishes with every hit he takes, though health is recovered slowly by not engaging in combat. Should the player lose all his health, the game is over, requiring the player to start again.Player must be in battle mode to fight.

The enemy’s health bar is shown on the screen as well; once this is drained, the player has defeated him and can progress forward.In addition to human enemies, Akuma occasionally sends his trained hawk to attack the player, which can be deflected with well-timed punches.There are some environmental hazards that the player can come upon, such as a falling portcullis or an open cliffside, which end the game immediately if not avoided. Throughout the game, cut scenes are shown, displaying such scenes as Akuma ordering his men to attack the player and Mariko nervously awaiting her fate in the back room.