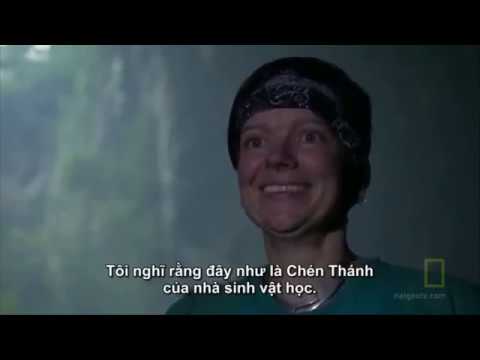 One of the most awe-inspiring journeys on Earth! The world’s biggest cave, Son Doong, calls you to be a part of its legacy and experience the beautiful vibes of life and nature like never before.

Our friends at National Geographic took a trip into the giant underground world of the Son Doong cave. This cave is unlike any other natural wonder in the world and the sheer colossal size of it will give you goosebumps. The Son Doong Expedition is one of the best bucket list adventures ever!

About the cave and expedition:
Son Doong cave(Vietnamese: Hang Son Doong) is world’s largest cave, located in Quang Binh province, Vietnam. It is found by a local man named Ho Khanh in 1991 and was recently discovered in 2009 by British cavers, led by Howard Limbert. The name “Son Doong” cave means “mountain river cave”, It was created 2-5 million years ago by river water eroding away the limestone underneath the mountain where the limestone was weak, the ceiling collapsed creating huge skylights.
Son Doong cave is more than 200 meters wide, 150 meters high, and approx 9 kilometers long, with caverns big enough to fit an entire city street inside them, twice as large as Deer Cave in Malaysia (currently considered the world’s largest with 90 meters wide, 100 meters high and 2 kilometers long). Son Doong cave was classified as the largest cave in the world by BCRA (British Cave Research Association) and selected as one of the most beautiful in the globe by the BBC news.
Son Doong cave is hidden in rugged Phong Nha-Ke Bang National Park in Quang Binh province near the border with Laos, the cave is part of a network of 150 or so caves, many still not surveyed, in the Annamite Mountains. This journey to the wild, exploring Son Doong Cave requires more than 25 porters, safety advisors & guides. You will explore the entire length of Son Doong Cave, Hang En Cave, and visit Ban Doong ethnic minority village.

Imagine trekking straight into the depths of the world’s largest cave which can fit a Boeing 747 flying through the largest passage, on an expedition unlike any other. Son Doong Cave is a masterpiece of nature with otherworldly landscapes, enormous stalagmites and statuesque stalactites – hanging from the ceiling and rising from the ground like an alien species. The real jungle inside the cave will amaze you in every way, while misty clouds envelope the scene. The fossil passage will give you the opportunity to understand the formation of this ancient limestone.

An adventure from start to finish, you will use ropes to climb into the entrance, and climb up the Great Wall of Vietnam, a calcite wall totaling 90m in height. You will always be under the guidance of the Oxalis safety team.
The Expedition is not a race, so you should not expect to rush on this tour. There will be plenty of time for photography and to explore the cave. However, all adventurers are expected to be fit, and have some previous trekking experience (not necessarily climbing or caving experience).